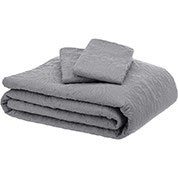 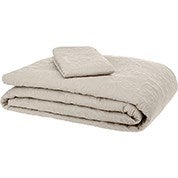 Single to Double Coverlet Sets
Refine by
315 Items
Sort By:

Does your bedroom feel like it’s missing something extra? That missing piece might very well be a coverlet.

A coverlet isn’t a quilt nor a bedspread, but an incredibly lightweight blanket that can either add an extra layer of warmth between your duvet and sheets or texture to the end of the bed. It can instantly transform the look of your room and be used any season.

Discover A Wide Range of Coverlet Sets Online in Australia

If you’ve been looking for an affordable and luxurious coverlet set, then you’ve come to the right place. Here at MyDeal, we have a wide selection of sophisticated coverlet sets available in various styles, sizes, colours, and designs. These practical sets come with an elegant coverlet and two matching pillowcases for convenience. Whether you’re looking for a red coverlet set or cotton coverlet set, you’ll find a wide variety of options in our collection.

We have cotton coverlet sets that are incredibly plush and notoriously comfy to sleep within, vintage coverlet sets to add a traditional look to your bedroom, and even luxurious velvet coverlet sets.

Coverlet Sets on Sale at MyDeal

Increase the level of comfort and warmth in your bed with a coverlet set from our collection. At MyDeal, we understand everyone is shopping on alternate budgets, which is why we offer fantastic sales and deals on our range of coverlet sets.

Browse our selection of coverlet sets wherever you are at any time of the day. We deliver all your items directly to your door, so all you need to do is buy your favourite coverlet set, and we’ll do the rest, delivering it directly to your door hassle-free. We even offer free shipping on selected coverlet sets, so you can save heaps! Add more style to your bedroom with our range of bedside tables, rugs, and pillows.

What our customers have to say